What does 'equals' mean?

I've been digging into NCTM's Developing Essential Understandings series lately. These are books that try and help teachers go beyond the surface level and understand deeply how math ideas connect and relate beneath the surface.

I'm working on a middle school math plan and I'm trying to read through each of the four books in the series for middle school math. These books are deceivingly dense, packing years of "aha" moments for students into a few pages at a time. I was reading the book on Expressions, Equations, and Functions a couple of days ago and I couldn't help but geek out as I was reading. Unfortunately for my wife, she was my captive audience, stuck next to me on a plane. I usually try and contain my excitement when I'm in public, but come on... I just realized that you can solve an equation by imagining both sides as separate functions and applying graphical transformations on the functions that preserve equality! Anyways, I thought I'd share a few amazing "aha" moments I had from reading so far. I'm sure some readers have long realized these things, but they were really cool for me to think about. The wonderful thing about teaching mathematics (and other subjects for that matter) is that you get a chance to constantly be a learner, finding complexity and depth in even the most simple topic. Here are a few takeaways:

On page 28, the authors quote Daniel Chazan as he describes his view on the role(s) of variables in mathematics. In physics, light is understood to be a duality, existing as a wave and a particle at the same time. Chazan describes how he views a variable as a duality also. A variable, like , can be a single unknown value (e.g. "5 times a number is 25. What is my number"). It can also be a placeholder for a changing quantity (e.g. "revenue depends on how many tickets are sold"). Chazan asserts that variables are actually both simultaneously, even though we often think of them in only one way or the other.

I had never considered this distinction before. I guess I've internalized this conceptual subconsciously, but I realized that some of my students haven't. As an example, Consider the idea of solving a system of equations using substitution:

One common way to solve this problem would be to recognize that from the first equation, y has the same value as . This means we can substitute to create a new equation,

In this one step, we've suddenly changed roles for our variable, . We started this problem with two linear equations in slope-intercept form. In that context, clearly represents a changing quantity, not just one particular unknown value. Students view variables this way every time they're asked to graph a line represented by an equation. when we substituted and created the last equation, the same variable, , is now just representing a single unknown value. What the heck?! I've been baffled before when students fail to get this idea of substitution. They're confused because they don't yet understand that a variable can take on multiple roles at the same time. In this case, we made this change on purpose. When we solve a system of equations, we're no longer interested in all the points that can satisfy each equation, we're trying to find only particular point(s) that are solutions to both equations.

Variables are simultaneously unknowns and changing quantities. You have to understand and accept both roles in order for the big picture to make sense. The two roles are like complemetary lenses in a pair of glasses. I can't wait to help students explicitly develop conceptual understanding of this distinction.

When we solve an equation without considering the functions-based paradigm, we're operating with blinders on.

Big idea #3 for expressions, equations, and functions seems pretty tame at first glance: "The equals sign indicates that two expressions are equivalent. It can also be used in defining or naming a single expression or function rule" (30).

Yep, got it. when we write an equation like , we're saying that is equivalent to 11. However, when we write that we're using an equals sign in more of an assignment sort of way. I don't usually think too much about this, but this chapter made me reconsider. These are very different ideas. In computer science, they make these different paradigms explicit. When you're trying to compare two expressions, programming languages typically require the symbol. However, if you're trying to set or store a value in a variable, you would usually to use a single symbol. Why don't I try and call this out more in math?

The chapter describes how these two uses of the equals sign lead to pedagogical approaches to teaching algebra called "equations-based" and "functions-based". I realized that when I use Lab Gear to teach expressions and equations in my classes, I'm leaning heavily on an "equations-based" paradigm to algebra. I'm suddenly appreciating the need to also showing students a "functions-based" view of algebra.

The awesome thing is that, just like the duality with variables, equations also have these shared paradigms of being used to denote equivalence and to name expressions. Pages 36 and 37 really convinced me of this. The example starts with the equation . Clearly this equals sign is being used to assert equivalence between these two expressions. Solving the equation yields the solution of .

For the sake of exploration, what if you considered this same problem from a "functions-based" paradigm. Here's what it might look like:

Let and . We can visualize these functions as lines on a graph. 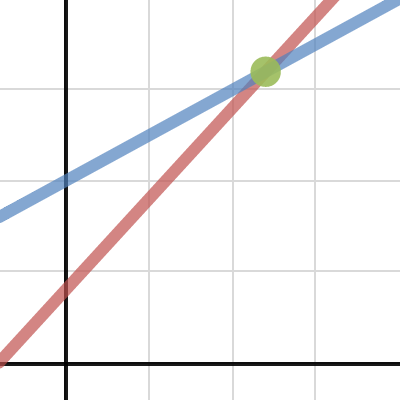 They intersect at the point . This is our first taste of the connection: the solution to our original equation is . Aha! 6 is the x-coordinate of the intersection point to the two original functions. It's the particular value for that makes the statement true!

This seems like a lot of overhead and extra work just to solve an equation, and it is. This is not a practical way to solve an equation, but rather is another way to conceptualize the process. The beauty becomes apparent when you look at a graph of all of these functions. Click the graph to explore this in Desmos. 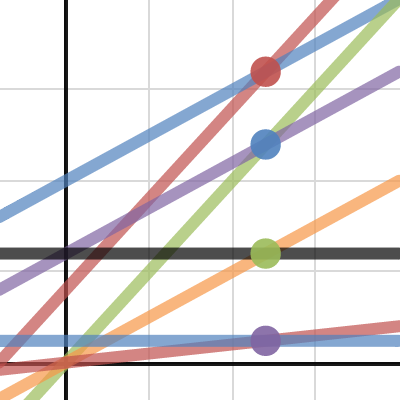 When we solve an equation without considering the functions-based paradigm, we're operating with blinders on. We're only looking at a small part of the broader mathematical ideas (the functions represented by each expression). This is fine most of the time. We're usally interested in finding a particular solution to an equation. However, a failure to recognize that these expressions can exist in broader ways will likely lead students to struggle.

I'm spending the rest of the week at #NCTMBoston! I'm looking forward to a great time learning from some amazing people.